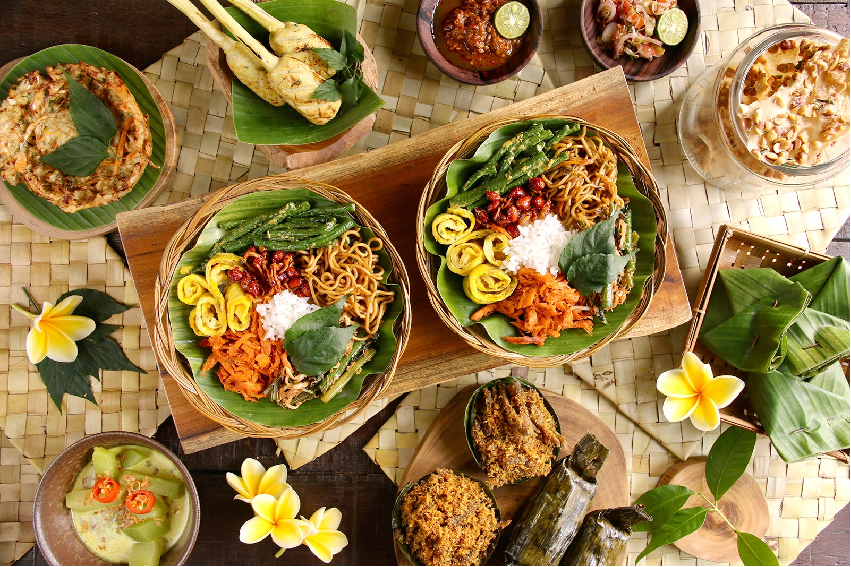 Indonesian food is full of intense flavors and very varied dishes where rice, spices, or vegetables cannot be missing. But what does Indonesia taste like? What are those dishes that will mark your trip, leaving an indelible memory in your memory? Here are our six favorites for you to try during your trip.

In many preparations, you will find common elements, such as rice, peanut sauce, chicken, egg, ginger, or what we call shrimp bread, which is known there as krupuk, and which is used as a crunchy accompaniment for almost everything. Much of the Indonesian food has the spirit of a combined plate, where proteins, carbohydrates, and vegetables come together, which makes it very balanced and complete.

Even street food can be quite healthy if chosen well (certainly more so than ours). But they also preserve stews of those that are prepared slowly and slowly to get all the flavor of the world in a sauce of gods.

So without further delay, you can write down your favorites so that you don’t miss any of our six essentials during your trip. There you will find many more variants of each dish and others that perhaps we have not tried, so do not hesitate to share them with us. 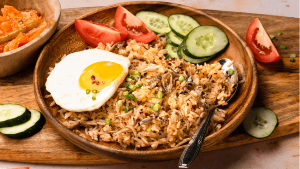 Considered the national dish of Indonesia, it is the best known and consumed in all its variants. It is basically made up of fried rice, stir-fried vegetables, and chicken, the three main elements of Indonesian cuisine. Sweet soy sauce is usually added and it is accompanied by an egg, either fried or in an omelet. From here on, everyone adds their own touch with the mixture of spices they prefer or by substituting the chicken for prawns, beef, pork, or satay (skewers that we will explain a little further down).

You will also find the Mie Goreng variant, which replaces rice with fried noodles, as well as many other Nasi, which simply repeat the base of rice and vegetables with other elements, the typical Indonesian food that you will find from homes to small street stalls, warungs, and even good restaurants, which also try to offer their refined version.

A simple salad that becomes addictive after a few days of being in Bali. They put it everywhere and its combination of lightly boiled vegetables with the traditional peanut sauce will captivate you, it doesn’t fail. The favorite dish of vegetarians and vegetable lovers. In some places, they present it with a boiled egg, so if you are vegan, specify that when ordering. They are usually complete with tofu or tempeh, which is a kind of fermented soy cake.

It is the Indonesian version of skewers: meat, seafood or fish skewered on a stick and grilled. But with the peculiarity of being covered with a delicious peanut sauce! In fact, this dressing is also known as satay sauce, which gives these skewers a delicious sweetness. They are generally made of chicken (Ayam), but it is also common to find them made of beef (sapi) or fish (Ikan).

They are native to the island of Java but can be found throughout the archipelago. In Bali, they are called Saté and you can find them in many street stalls, markets, or accompanying dishes in warungs and restaurants. They are a national emblem.

A kind of shredded beef but much spicier. The meat is stewed for hours with coconut milk and a mix of spices that includes ginger, turmeric, galangal, garlic, or chili peppers. Originally from Padang, on the island of Sumatra, she also receives this surname: Rendang Padang; or its Indonesian version, Rendang Minangkabau. It is usually accompanied by rice and sautéed or raw vegetables. A delicacy is full of flavor reminiscent of homemade food, those long stews made with patience and a lot of love.

Soto is a meat and vegetable soup that takes different variants depending on the island and even the area of ​​each island of the Indonesian archipelago. Of course, everyone thinks that their version is the best, but the one that gathers the most favorable opinions is the Soto Betawi, thanks to the creaminess provided by the coconut or cow’s milk and the mixture of spices. In some cases, the guts of the cow are also added.

This street food achieved worldwide fame after former US President Barack Obama mentioned it after a trip to Jakarta. It consists of a soup with meatballs, noodles, and vegetables. It is a classic among young people since for little money you will be able to satisfy yourself and it can be found in any corner of any city. Normally thanks to street carts that already have everything ready to serve you your Bakso quickly.

The meatballs are chicken, beef, pork, or some masterful mixture of various meats, while the soup is usually meat and is responsible for heating the meatballs and rice noodles. You can also add a hard-boiled egg, finely chopped raw onion, and some crunchy.